The first project we did for the August Workshop was to create a Luminary using JustRite Stamps.
I showed the gals that they could purchase a Febreze Flameless Luminary Starter Kit from Walmart and used the base for their project.  They were given a LED light to use in case they didn't want to purchase the Febreze kit.
The Spellbinders Dahlia Nestie cut out the DP.  The JustRite Images were stamped with Black Memento Ink on the outside of the vellum and then Super Fine Ranger Embossing powder was applied to the ink and embossed.  Next the image was colored on the opposite side using markers.   As the light shines through it looks like stained glass.  Martha Stewart's Modern Garland Punch was used to finish off the top.  Selma helped me design this project and everyone loved it.
I wish it showed up better, but hopefully you get the picture 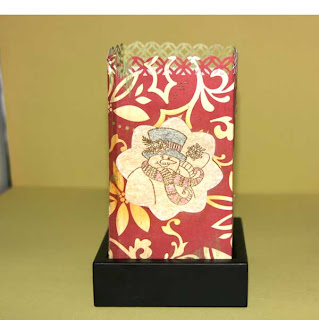 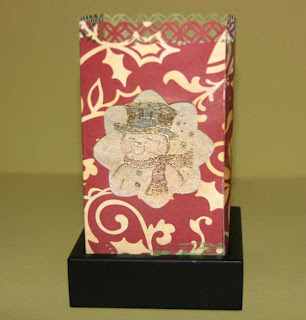 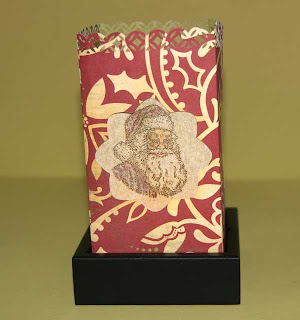 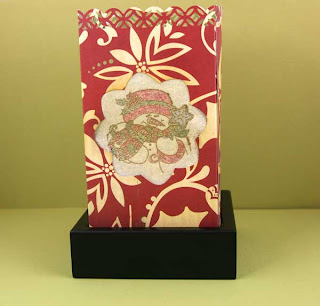 Next I showed everyone how to do some of the Tim Holtz distressing techniques using Grunge Paper, Distressed Inks.  It was so much fun seeing how everyone's turned out so different and they were all just beautiful. 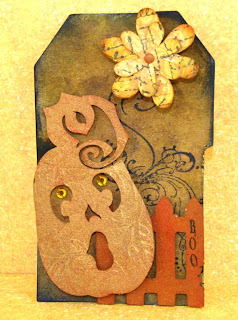 The last project we did was to create this card using Cuttlebug's new Perfect Perennials  Embossing Folder, Martha Stewart's Quilt Punch and the Square Nesties by Spellbinders.  The Stamp is from HeartFelt Creation and stamped on the green piece that was left from the cut out window. 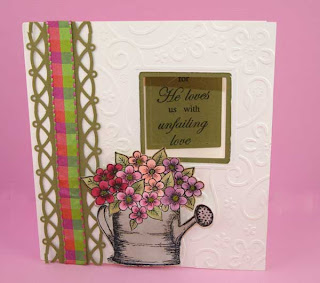 I had everyone bring their favorite card they had made and put them on display around the room.  Each card was numbered and later in the day they voted on their two favorite cards.   .It was a very hard decision as so many were absolutely stunning.  I failed to get a picture of the winning cards, but hopefully someone else did and I can post them later.  That was really fun!!!
Gretchen's card was #1 and Maggie's card was #2. Gretchen was given a HeartFelt Creation die and Maggie received a Heartfelt Creation Stamp.  We will certainly do that again!!!
It was a great day and I think everyone enjoyed the projects!!!
Posted by Joan Fricker at 7:13 AM

Such a cute idea! I love luminaries and love to line our front entryway with them at halloween and Christmas. We lived in Albuquerque for two years and I loved Christmas with all the luminaries. I hope everyone tries these...the grandkids love them.

These are some stunning projects. What a great idea of the luminary. I love it. The workshop looks like such fun. Maybe I can drive up some time for a workshop!

**I don't currently have set shop hours.
**Please call at least a day ahead if possible
to make sure I will be available. Thank You.

Items In My Store by Manufacturer

If you are a NEW customer, I MUST HAVE

1.Your Name.
2.Your Complete Mailing Address.
3. Your Telephone Number
4.Your method of Payment.
I accept: Visa, Master Card, Discover and PayPal
(call if using a card)

Shipping Charges, including International orders are exactly what it costs me to ship to you.

All manufacturers are listed on the right hand side under "Items In My Store". When you get to the bottom of the page, click on "Previous" and that takes you back to previous pages. If you need help, please don't hesitate to contact me.

Also, when placing your order, please put ORDER in your subject line. If you do not get a Thank You back, please contact us again as your order went to spam. We try to catch them all, but sometimes the orders get missed because I can have 50+ pages several times a day. It really helps if ORDER is in the subject line.